Upended Reason and the Christmas Season: An Evening of Carols with the Dallas Family Band 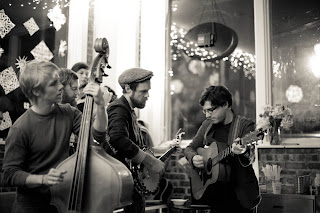 Photo by Kelsey Foster
On the Sunday evening preceding Christmas, the Dallas Family Band hosted a carol sing at Murray Street Coffee and, meanwhile, solved a linguistic quandary.  The word “folk” has started to irk me.  Technically “folk” means “people” and says nothing specific save what its writer assumes readers’ minds will invoke.  The possibilities are too numerous.  Better to say precisely what kind of folk.  The separate members of the creative, musical cooperative Dallas Family Band have, at different times, all been yoked under the genre's title.  At Murray Street this past Sunday, their community gave me an armful of descriptors to precede it.
The Dallas Family Band are liberal folk, humored folk.  I never tallied the exact number of guitars and strings and drums and noise-boxes.  The instruments were numerous and migratory, given and received open-handed among members.  Musicians arriving late were handed a guitar and seamlessly assimilated into the musical throng.  Mistakes were made, inevitable in such a large group.   Certain Christmas carols are fraught with syllabic complications and we, band and singers, found most of them.  But all the inconsistently timed verse breaks and verbal flubs were absorbed in a swell of boundless mirth.
The Family Band are loving, hospitable, and loud folk.  It was no performance, rather a participatory, band-lead carol sing-a-long.  Nothing would grieve a regular Dallas Family Band member more than to refer to the collective in closed terms or to draw hard boundaries.  The community exists only in the elusive, transpiring present, eternity’s gracious tangent.  The Dallas Family Band consists of all players and any human within earshot who happens to hum a note, tap a worn shoe, clap against their thigh.  This spirit of liberality manifests itself too in volume.  The musicians emptied their lungs into the vaulted room without reservation, red-faced from the exertion and we, the conscripted choir, followed suit.  Sadly, I have never sung in church with quite the abandon that I sang on that Sunday. 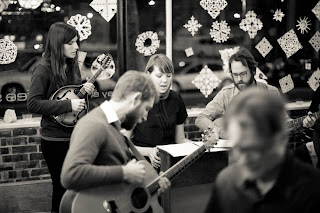 Photo by Kelsey Foster
The Dallas Family Band are storytelling folk, believing folk.  They are evocative narrators, even with borrowed material from antiquity.  You could almost feel the promising wind of Palestine, could picture the Family Band as minstrels, leading a trepid cluster of Magi to the toddler Jesus.  You could picture the infant king playing at the breasts of his gracious mother.  You could hear the low-caste sheep herders cowering before the time-shattering announcement of an incarnation.  You could even imagine the Family Band fronting a march of zealous abolitionists with the hymn O Holy Night, loudly announcing their faith in and reason for the end of oppression.  (I was surprised as well, but readers would do well to look up the third verse of the song.  The historical link to the abolition movement, buttressed by Christmas themes amplify what is otherwise a too-familiar, seasonal tune.)
The Dallas Family Band took songs that had labored too long under childish sentimentality and recovered them as meaningful narratives.  Christmas songs go stale as easily as the season’s baked wares.  The weighty words are often lost among the garish advertisements and vapid self-interest that hold the holiday cruel hostage.  Even the reaction to remember the season’s meaning is nothing but a clichéd rhyme.  In Murray Street Coffee, a truer reclamation occurred.  It was perhaps the best manifestation of what happens when musically gifted friends gather as surrogate brothers and sisters, daring and enticing a crowd to prolong their joyous strains.
...
The Beaten Sea have written an original Christmas Carol.  The year has already revolved around to another beginning, but lend your support to the band anyway and buy this tune for a mere buck, memorize it, and sing it boldly in 359 days:
The Gathering Gloom in the Stable Room
Posted by Dick Sullivan at 10:45

Great description of the night!

However never before have I been asked to so graphically imagine the holy mother's bare breasts!

Also, this is the second time I've been made to imagine the holy mother's breasts because of you. Thanks.