Don't know why I haven't done this yet. I'm taking a crack at legitimacy:

And just because it's redefining rad:

There Goes My Hero: Confession of a Mavs Fan 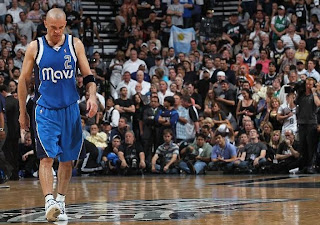 1. "When the Knicks lose, they just lose. It's a flat feeling; there's nothing there. Now the Mavericks, now, here, we have a rich history of really fascinating ways to lose a crucial game. You know what I mean? Defeats that just keep you awake at night. They pound in your head like the hammer of fate. Yeah, you can analyze a Mavericks game day and night for a month and still uncover really complex layers of feelings. Feelings you didn't even know you were capable of having. Yeah. That kind of pain has a memory all of its own. "

2. "But there's something more hellish about the Maverick's suffering. The Knicks don't have somebody pinning them down and pulling off their wings with tweezers, unless there is such a thing as self-induced wing-pulling. The Mavericks have the Spurs.

"All Mavericks fans have to do is look at Popovich's severe face for their source of pain. Or they can just look 277 miles south to San Antonio. The Spurs have won 4 NBA Championships since acquiring the franchise from Dallas.

"The Mavericks consistently have had better teams than the Knicks, so the question becomes: What hurts more--sustained mediocrity or falling short over and over to the same team? Again, it doesn't seem to be a contest."

Two very, very apt quotes, made even more intriguing by the fact that neither one was written about the Mavericks, but rather about the Boston Red Sox. The first is from the movie Game 6, set in the midst of the 1986 World Series on the day leading up to Bill Buckner's hope-killing error. The second is from a 2004 article written just after A-Rod arrived in New York. I merely substituted "Knicks" for "Mets," in the first quote, "Cubs" in the second. "Steinbrenner" became "Popovich" and, predictably, the "Yankees" made their easy transformation into the "Spurs." From there, the 210 miles between Boston and New York, the multiple Yankee Series Championships, and the acquisition of Babe Ruth chillingly and accurately morph into our Texas plot.

Why the Knicks? Maybe because they are an established, storied franchise with a still loyal fan base. But you could pick any team currently laboring in sustained mediocrity: Clippers, Grizzlies, Timberwolves, Nets. I don't care which perennially awful team it is; it pails in comparison to the fly-high, crash-and-burn Mavericks.

You've got to be at the top of the Mountain before you break your neck on the fall. A run through the Spurs and Suns to the '06 finals. A 67 win, MVP-making season. These are top of the mountain moments. Only the Mavericks seem to know how to toy with their fans in a truly soul-crushing way.

And the thing is that, even in 1986, even in 2004, being a Red Sox fan was significantly better than being a Mavericks fan now. Five World Series Championships, even if they were 68 years ago lend a legendary status to your team. The Mavericks are nothing now except legendarily disappointing.

One more modified quote from Game 6: "I coulda been happy. I coulda been a Spurs fan." I could've had a brother that moved from Arizona to San Antonio. I could've spent a few summers there. I could've watched my team win four titles. I could've been a Spurs fan. But I wasn''t and I won't. If you don't understand that; you don't understand being a fan. I am a Mavs fan for life. When they fail, it's going to hurt me. When they climb the mountain again, I'm going to get my hopes up. Indifference is no longer an option and disloyalty is definitely not an option. Unlike casual Mavericks fans who are really Cowboys fans, I can't abandon my team. I'm in too deep.

Like a Red Sox fan of 1986, I've come to expect epic failure from the team I love. I don't know if it was just last night, but I think I've become fully jaded. They may win tomorrow night and they might just win three in a row to surprise the Spurs. After all, like it's been for the past ten years, they have the roster to be great. But I'm no longer counting on it. Having won the World Series twice since their 86 year drought, Boston Red Sox fans have no right to be brooding. That disposition now belongs wholesale to Dallas Mavericks Fans. Somebody get me a drink. It's going to be a long several decades.
Posted by Dick Sullivan at 12:56 2 comments: